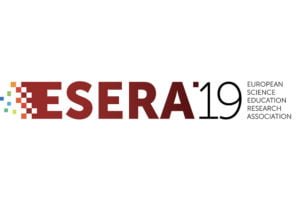 Our paper “Use Of Visual Representations In Astronomy Education: Issues, Affordances And Research Perspectives” has been accepted for presentation at the 2019 ESERA Conference.

Astronomy is commonly taught in primary schools, with an initial focus on explaining day and night, the solar system and seasons. However, there is abundant evidence that students going into secondary and even tertiary studies in astronomy have limited understanding and indeed misconceptions of astronomical phenomena. A core difficulty for students is the need in visualising/explaining astronomical phenomena, to coordinate earth and space centred perspectives and representations. This presentation will describe lesson sequences conducted in 3 schools, over 12 classes, focused on Grades 1 and 4 (Ages 6 and 10) children’s visualisation of day and night from earth and space perspectives. The sequence is part of a project that links science with mathematics through representation construction and modeling as core approaches to learning. Key features of the sequence were children’s construction and coordination of spatial representations that linked the changes/movements in shadows (patterns) throughout the day with the movement of the sun in the sky and with earth’s rotation in relation to the sun to explain day and night, and the pedagogy employed by teachers to build on children’s representations to establish common understandings. The mathematics focus was on spatial reasoning including representations of length, rotation and angle, pattern representation, and temporal reasoning. Data included children’s artefacts, pre- and post-tests, field notes and video capture of key lessons, and student and teacher interviews. The pre- and post-test data and children’s interviews showed considerable shifts in children’s understanding of day and night and earth-sun relations. Analysis of the video data, and field notes, showed the complexity of concepts and spatial reasoning for children, as well as the power of a guided inquiry pedagogy involving the construction and comparison/evaluation of representations. The study provides fresh insights into the challenges presented in constructing flexible understandings of astronomical phenomena based on the coordination of spatial and temporal representations from different perspectives.

Astronomy is taught across school year levels, from primary school foci on night and day and planetary features and exploration, to more complex considerations of moon phases, celestial movement, and cosmology in secondary schools. Yet, research has consistently shown a variety of misconceptions of a diverse range of phenomena such as earth-sun relations, seasons, lunar eclipses etc., despite repeated exposure to teaching. A major problem at each level is the coordination of earth bound perspectives on phenomena and space perspectives. This is essentially a problem of visualization and spatial reasoning involving coordination of different -earth-based and space-based representational systems.

Visualisation is increasingly recognized as central to conceptual learning across a range of sciences (Gilber, 2005), from learning to coordinate visual-spatial sub-micro particle arrangements to explain macro material properties, to the abstracted visualisations of forces and fields governing the movements of objects in space in physics. Underpinning all of these are systems of representation through which we visualize, and coordinate visual and spatial relations, such as diagrams, models and simulations of earth movements, and apparent movement of celestial objects. Thus, we argue that spatial reasoning and visualization through these representations is particularly important for learning challenging astronomy concepts (Hubber et al, 2017; Testa et al., 2017; Tytler et al. 2017).

We are currently engaged in a project exploring interdisciplinary approaches to science and mathematics teaching and learning in primary schools (Interdisciplinary Mathematics and Science IMS: https://imslearning.org/ ), across a range of year levels and topics. The principle underpinning the project is that robust learning involves the invention, evaluation, refinement and coordination of representational systems in science and mathematics, and that through a serious focus on how these science and mathematics systems interrelate, more robust learning of foundational constructs will occur. Our past research indicates that deeper learning in both science and mathematics is achievable when students create and assess representations, make justified claims, and have first-hand experiences of the imaginative challenges and pleasures of these disciplinary processes. Creative and critical reasoning can be developed when students are embedded in contexts of guided inquiry, where they see their overarching learning purpose is to generate, revise, and critique knowledge through making and critiquing representations (Lehrer & Schauble, 2012; Prain & Tytler, 2012, Tytler et al., 2013). In visualizing, creating and analysing representations, data, models, and claims, students need to learn about the varied purposes and specific affordances of different disciplinary representations for imagining, reasoning and claim-making.

In this presentation we describe the planning and implementation of a primary school astronomy unit that focuses particularly on students constructing and coordinating representations to link the movement of shadows over the day, the sun’s position in the sky, night and day, and the rotation of the earth. We link the spatial reasoning processes involved in this work with fundamental reasoning through ideas developed as part of the mathematics curriculum, such as length, rotation and angle, time, and pattern recognition and representation.

We worked with 12 teachers of grades 1-4 (ages 6-10) in 3 schools to plan and implement a sequence of 5 lessons focused on students understanding of the sun-earth relations with regard to shadows, daily solar movement, and night and day. Teachers implemented the sequence flexibly and collaboratively according to student needs. The pedagogy focused on children’s guided observations and construction of diagrammatic and textual representations, with class discussion helping children evaluate and refine representational work.

Students spent a day tracking their shadows on the asphalt using a chalk outline, linking this to the apparent movement of the sun in sky – rotation and angle, and linking the sun’s position with the position of the shadow. The changing length of shadows was tracked by a variety of means. A gnome was placed in the yard and it’s shadow traced on poster paper at regular intervals, giving a sense of the continuous change in length and directions. This could then be used in the classroom to model the change in the sun’s position using a torch, and to show how the same results could be had if the earth (poster paper) moved and the sun (torch) remained still. A presentation of the earth’s rotation using video animation was shown and children played with globes and torches to model their shadow results.

Data consisted of children’s productions, field notes and video capture of teaching and learning interactions including children’s collaborative discussion in selected classrooms, a pre- and post-test, and teacher and student interviews. The test included questions on the nature and cause of shadows, the movement of the sun in the sky, and the relation of the sun and earth to cause night and day. Children’s interview questions focused on their changing understandings, their interpretation of the representations, and their response to aspects of the learning sequence.

In the presentation we will provide examples of children’s work, transcripts and video evidence to illustrate:

This research showed the fundamental importance of students constructing, evaluating and coordinating multiple visual-spatial representations, including 2D drawings, 3D models and embodied gestures, to perceive the spatial relations underpinning earth sun relations relating to shadows, earth bound experience and space perspectives of day and night. It was clear that the representational challenge involved spatial reasoning practices/constructs associated with the mathematics curriculum; measuring, representing, coordinating and interpreting data about shadow length, and spatial reasoning about the change in angle of the sun. Pedagogically, the sequence demonstrated the effectiveness of a guided inquiry, representation construction/modeling approach, with longer term planning involving careful sequencing of representational moves, and short term strategies involving teacher response to student learning needs through embodied strategies and model manipulation. The research has provided fresh insight into the visual-spatial challenges for younger children in learning astronomy, and key strategies for constructing effective learning sequences.